The first major building in the village started with the council houses on Kingsmead Hill in 1922, then in Old House Lane in 1931, and next in Hansells Mead in 1939. Everything then stopped until after the war when Parkfields was added, and then Temple Mead was built, mainly for old people of the village. Private houses were built in Grange Lane. Nonetheless, at the end of the Second World War, Roydon was still essentially a farming village, although since then, a number of farms have disappeared. The first farm to close down was Lightfoots Farm in 1949, and the fields were presented to the School for playing fields and to the Parish Council as a recreation ground for cricket, football and tennis, and as a children's play area.

The church of St. Peter-ad-Vincula continued to be a typical village church, with the altar at the east end, a traditional pulpit and reading desk, and a large choir with boys and men. Major changes were then implemented by the Revd Christopher Wansey in the 1960s, including reordering the church by putting the altar on the north wall, with pews re-arranged on three sides around it.

This scheme led to the commissioning of a new altar table from a local sculptress, Angela Godfrey, and the installation of a new north window behind the new altar depicting "The Supper at Emmaus", both of which can be seen today. 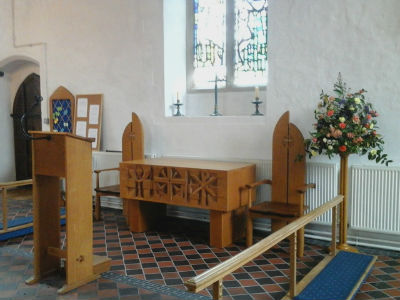 The reorientation proposal, however, met with considerable opposition, resulting in a hearing in the consistory court heard by the Diocesan Chancellor. The court gave faculty approval to the scheme; this made the pulpit and reading desk redundant, so they were sold, together with an ancient alms chest that had been in the church for centuries.

Plans at this time to build a church hall adjoining the church, plus a car park, were also opposed in the same court case, but the opponents were successful and the chancellor refused to grant the two faculties. The court decision on all three faculty petitions set certain legal precedents, and is reported in the All England Law Reports for 1969, as well as referred to in standard ecclesiastical law textbooks. Shortly after the court case the plans for the church hall and car park were revised, by positioning the proposed hall to the south of the main entrance instead of to the west behind the tower. This time the faculty was granted, and so the present much needed and well used church hall and car park were constructed, in spite of the fact that many graves had to be moved.

During the incumbency of Christopher Wansey, the old Vicarage and the medieval Church House, on opposite sides of the church, were both sold, plus land along the High Street on which a row of neo-Georgian houses was built, (one of those houses, for a while, becoming the new Vicarage).

A Millennium project, in the early 21st century, converted the old sanctuary into a self-contained chapel, with glass extending the ancient rood screen. The Colte Chapel, which had been the centre of worship for many centuries, therefore now provides a welcoming place for smaller services, and a meeting and worship area for many different groups. 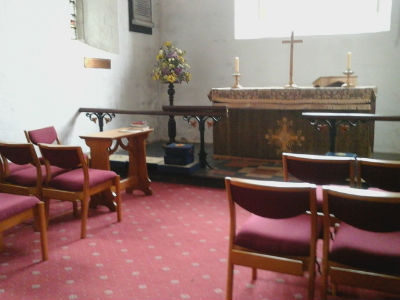 A few years ago, the pews were removed from the church and replaced with comfortable chairs, giving flexibility to the use of the building, both for worship and other activities.